This week, the Harvard Program on Science, Technology, & Society held the latest installment in its Science and Democracy Lecture Series, featuring Anne Wojcicki, the co-founder and CEO of 23andMe, a direct-to-consumer genetic testing company. 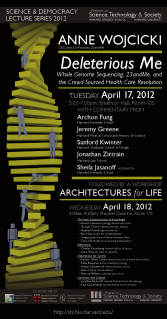 The lecture, called “Deleterious Me,” combined an account of 23andMe’s practices, and the challenges they’ve faced, with a blend of optimism and fatalism about the future (and future ubiquity) of personalized medicine, affordable biotechnology, and patient- (or consumer-) driven innovation in the health care industry.
Many in attendance, not least a few of the scholars on the panel tasked with responding to the address, found Wojcicki’s boosterism unpalatable. In particular, a line of critique running through the commentary centered on the nature of the relationship between the two stated missions of 23andMe: one individualistic, one collectivist.

On the one hand, Wojcicki highlighted her desire to empower consumer-patients by circumventing the medical establishment and making data available; on the other, she insisted on the role of 23andMe as a research platform, arguing that its unique dataset rendered it invaluable as a partner and model for further research.

There’s a potential tension here, one increasingly central to the modern biomedical establishment and, more generally, to the longer history of the interaction between patients (or subjects), science (or medicine), and capitalism. Who owns what? What’s the impact of information asymmetries? Who is this research (or data) for?

The severest criticism along these lines came from Sanford Kwinter, a professor at the Graduate School of Design and the last panelist to comment. Kwinter’s response was an unrelenting indictment of the outdated (market) logic underlying 23andMe, which (Kwinter argued) veiled exploitative practices in the language of “consumer choice.”

Accusing Wojcicki of monetizing sickness, capitalizing on fear, and building 2.0 technology on 1.0 ideals, Kwinter argued that the mantra “the customer is always right” is even more dangerous in medicine than elsewhere–and that we should remember that the phrase’s most loyal adherents are sellers, not customers.

Folks differed on their opinions of Kwinter’s prudence, but no one denied his rhetorical strength. What was clear–in Wojcicki’s inability to respond and in the absence of conversation at this level at the next day’s workshop–was that an industrial culture (Silicon Valley biotech) built around innovation and “iteration” simply wasn’t ready for such critical “why” questions.

The problem, it seems, is that the biomedical industry (whether entrepreneurial or establishment) and the scholars who critique it operate at different levels. While this might seem obvious, the upshot is that those whose lives are built directly on the logic of the market simply can’t engage in the scrutiny of those foundations.

While this week’s event didn’t destroy my faith in normative scholarly criticism of science and industry–far from it!–, it did reveal a potential limitation on the forms in which that engagement can take place. Far from “iterating” on existing models, then, I’d suggest that some form of revolution, rather than evolution, might be necessary to make critiques like Kwinter’s heard.