“There is a growing feeling hereabout,” wrote an Ohio State chemist in 1913, “and also in other localities west of the Alleghenies that Central West Chemists do not have to submit to any humilities from the Eastern crown.”

I came across this quotation on a trip to archives at the University of Illinois in Urbana-Champaign last spring. I might not have thought much of it, but the drive from Newark, NJ – thirteen lonely hours through Pennsylvania, Ohio, Indiana, and Illinois, via interstates 78, 76, 70, 74, and, if you want, 72 – had served me notice that the Midwest was something to be reckoned with.

This past Monday evening, the drive to my folks’ house in Pittsburgh for the holidays got me thinking about region again. Specifically: is there a regional history of American science?

Much of American history is regional history. Think of the prominence of Southern history and the history of the West. With their strong ties to social history, historians of medicine in America have long attended to regional difference as well.

However, much less attention has been paid to region in the history of science. In a field defined thematically rather than geographically, with the universality of science as its null hypothesis, this is not especially surprising. We know that scientific knowledge is made in situated communities; that the signal achievement of these communities is stabilizing their facts and making them travel around the world; that the rising prominence of science has been bound up with that of the nation-state. These geographic levels of analysis are nicely encapsulated in a panel title from November’s History of Science Society conference: “Between the Local and Global: National Pharmacopoeias in the Eighteenth and Nineteenth Centuries.” Can we make room for region in this Local/National/Global schema?

The recipient of the letter quoted at the top was William A. Noyes, chair of the rapidly-growing chemistry department of the University of Illinois. As longtime editor-in-chief of the Journal of the American Chemical Society and the founder of Chemical Abstracts, Noyes did more than anyone else to promote the development of American chemical literature; these journals, in turn, did much to knit together the national community of American chemists and advance America’s international reputation in the field.

Noyes grew up in Iowa and taught for seventeen years at Rose Polytechnic Institute in Terre Haute, Indiana (remain on I-70 west through Indianapolis rather than picking up I-74, a highway sign informed me on my drive). There, he first met the young chemist Austin Patterson, who would later succeed him as editor of Chemical Abstracts. Patterson soon left Terre Haute to return to his hometown of Xenia, Ohio (take the I-270 exit off of I-70 at Columbus). When he took over the abstract journal from Noyes, he relocated its headquarters from Illinois to the campus of Ohio State in Columbus (I-70, exit 101A).  Patterson’s successor, E.J. Crane, was an Ohio native and a graduate of Ohio State, as was Crane’s successor, Dale Baker. From 1907 to 1986, one of the leading organs of the national (and international) consolidation of the discipline of chemistry was situated in the Midwest and run by Midwesterners – some of whom, as the quotation above suggests, identified quite explicitly as such. Is national scientific identity grounded in regional scientific identity?

Other scientific fields were more directly connected to regional interests. The history of agricultural science, particularly at land-grant colleges, is another avenue for exploring how region shaped the making of scientific knowledge in America. (Sarah Milov is writing such a history of tobacco science.) 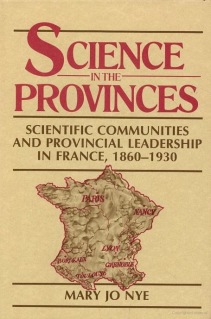 Restrictions on research in one region might also create opportunities in another. In the case of France, for example, Mary Jo Nye has shown that the centralization of national scientific institutions in Paris left greater room for intellectual and institutional experimentation in the provinces.

Some questions, then, to pass the time on your own holiday road trips: In what other ways might region shape science? Can region be a means of connecting the history of American science more closely with American social and cultural history? How does region matter in contemporary American science? Who has done interesting work in this area?