The official GIF of the competition.

Following a Twitter exchange with Michael Barany last Thursday evening, I am pleased to announce the start of a new series on this blog: the Thomas Kuhn’s Structure of Scientific Revolutions Comparison Watch.

Have you noticed how frequently some writer on science, social science, or business will favorably compare an individual they like (often themselves) to a paradigm-shifting scientist from Kuhn’s Structure—Copernicus, Galileo, Lavoisier, Einstein, etc.? Because we have! And now, at last, there will be a place where all those comparisons can be assembled, collated, referenced, and analyzed as a phenomenon in the popular cultural understanding of the history of science.*

Please tweet us your favorites at @americansciblog, or in the comments. And keep us posted as you find new ones in the future. (Ideally, these should not merely be references to paradigm shifts, but explicit mentions of Kuhn and/or his book.)

Our first entry, again thanks to Michael, is Martin Bernal, from his Black Athena: The Afroasiatic Roots of Classical Civilization, Vol. 1: 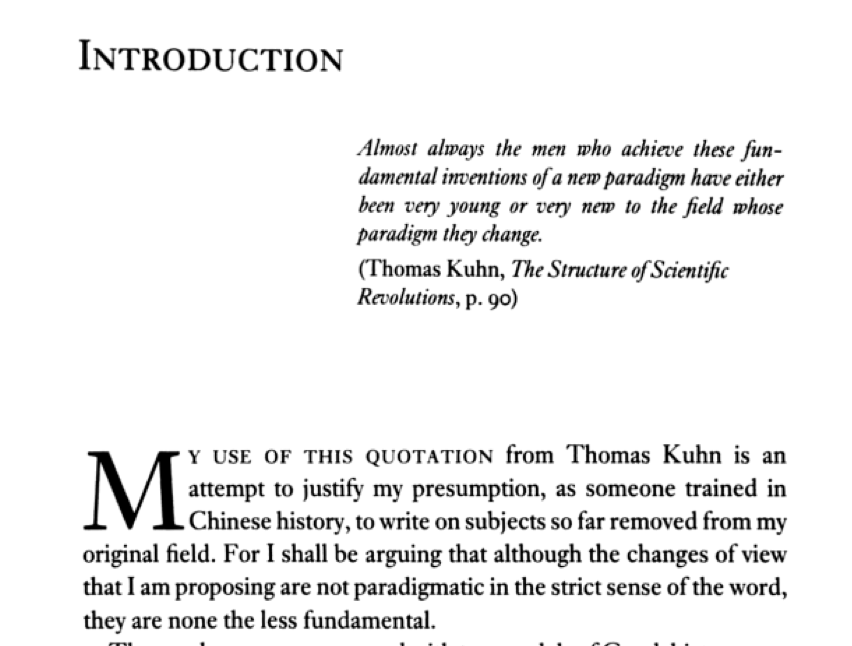 Extra points to this one, since it’s the epigraph (+1) to the introduction (+1).

The floor is open—tweet or comment with your entries.

*For an inspiration, see James Fallows, who has kept track of the exasperating “boiling frog” metaphor for years and years.